My oldest son wanted me to build a water tower on my current free-mo module and as luck would have it I found a Railtown spherical water tower kit (Walthers link) at the local hobby store with a blinking light. The two of us put it together and at my son’s request we painted it a light blue. He wants me to put a stripe around the center of it but other wise it’s basically finished. 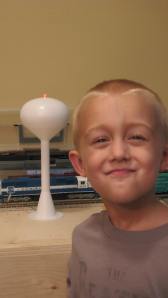 And another shot testing the light before paint (it blinks but it’s hard to capture that in a still photo, it was actually fairly lucky I caught it on in both photos)

I’ll post more pictures when I get around to finishing the paint job.