I’ve been trying to tackle the mess that has accrued in my train room in recent months and in the process try to better store things that have been sitting in boxes a while. In my searches I came upon the small bit of N-scale equipment I have. A couple years ago I was given some bits of sectional (I think atlas), mostly it’s a few  curve pieces and a couple straight. I decided to make a small portable N-scale switching layout. In the end all I ended up doing is picking up a used Great Northern Plymouth MDT locomotive that came with a PRR caboose and a new Rock Island 56′ hopper and nothing else. If I recall correctly I ended up packing it up for a move and never getting back to it. 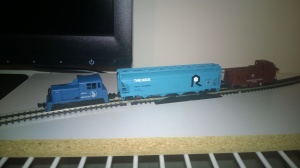 It’s an odd couple of a train, and looks a little sad in length but here is the original story. My plan was to build a RI/CNW era grain switching layout. The MDT was basically just a cheap small switcher, and the caboose I really didn’t have an interest in but it was included in the switcher online auction. The hopper is a little different, I bought that new (for 11.95 at hobby lobby according to the sticker) and it’s never been used. That was in part why I wanted to put it on my desk because it seemed wrong to keep in in a box since it’s already been there at least 4 years.

I’d still like to do something N-scale as a side project in the future, my house is a split level and as a result has a knee-wall around the outside walls of the house. This ends up being about 10 inches deep of space that isn’t really used for much. What I’d like to do is a long narrow diorama with one or two switches and a handful of cars. Maybe even do it as a winter railroad as I’ve always wanted to model something in winter. It’d be a fun project to do with the kids (since they have small enough fingers to reliably get these things on the rail!).

In the mean time it’s a cool desk ornament, and speaking of kids my middle child Jacob found it and was in awe at how tiny it was. He pulled up a chair next to me to help me write this blog. 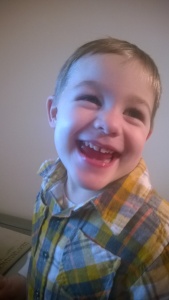