As I mentioned Tuesday my river sprung a leak after I poured in some Magic Water. It turns out that it got worse after I left it to try. Fortunately it didn’t all leak out and it doesn’t look too bad.

No need to cry a river for me

One interesting side effect to the water level dropping so much is that the higher ground that I had intended to be underwater had a little of the resin stick around so it looks rather wet. From this picture you can also see that my end dams did not hold (the other side is actually a lot worse) which led to more drippings 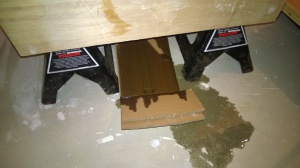 It’s water under the bridge

I’m really not looking forward to cleaning that stuff up, I’m planning on letting it sit and harden a few days under the theory that it might be easier to scrape off. Another small disappointment ended up being some glue that had run down into the river from gluing the rocks in and pooled in low spots. It wasn’t really that noticeable before I put water down but it kind of sticks out a bit now.

Overall I’d say it turned out pretty well, sure the water is not perfect but it’s good enough and I learned some good stuff from it. Someday I may re-do it if I ever run out of projects. In the mean time I’m going to drop some feeders (just in case I use it for as a mini-module) and then ballast.