Back in June I included a picture of a 3D printer I was building:

Earlier this summer I got to the point where it was mechanically assembled and just waiting on a control board. I want to put a good control board in it, which translates to expensive, so it went on the back burner as things like rebuilding a transmission took priority. Eventually my Anet A8 got to the point where I just would get wildly different results from day to day which meant it was hard to print things because the problems I solved Monday were back on Tuesday and a different sent of fixes would be needed. I very strongly suspected this was related to cut corners in the Anet. Like instead of 6mm thick aluminum frame a brittle acrylic frame that isn’t very rigid. Or instead of pulley’s with teeth flat pulley’s and so on.

Since the printer I was building fixed these problems (and using a power supply that wasn’t likely to blow up) I thought, hey why not use the circuit board from the Anet to power my Prusa build temporarily. It involved tearing down the Anet and finishing up the Prusa but it’s working: 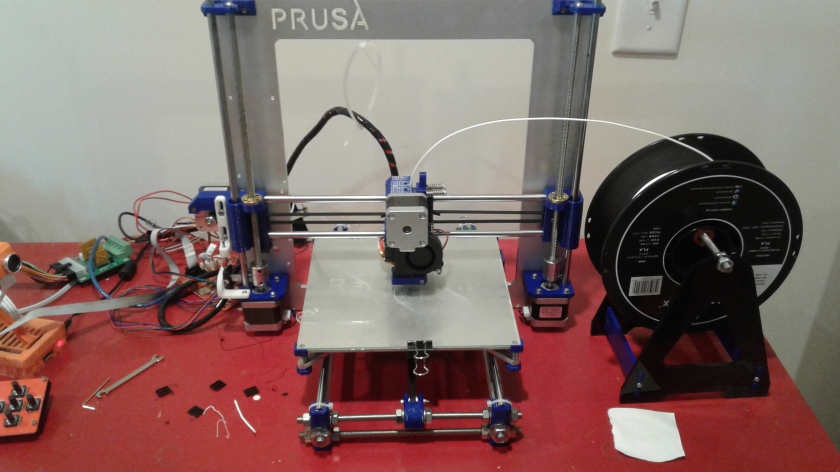 Not pretty… but working phenomenally and I’m finally getting things printed. Including some pallets I promised to send a friend in July (They will be coming soon Bill!). In the mean time how about some fun prints I’ve been working on.

I love 3D printed vases, they are so fun to watch being printed and some of the designs available are so cool like this one by Devin Montes that you can find on MyMiniFactory here.

This is another model that I’m still printing parts of called Bullet Bill (from the Mario games) by Martin Moore available on MyMiniFactory here.