Right now I’m in the middle of “snowmaggedon” (ice, a lot of snow, and blizzard conditions) so to stave off a little cabin fever I worked on some coupler conversions. I’ve been reorganizing my home office/train room and found some cement hoppers in what I thought was a repair drawer but I can’t find anything wrong with them and can’t remember what was broken so maybe they’ve been sitting in the drawer a couple years for no reason.

I ended up running out of couplers, and it’s still snowing, so I there was nothing for it but to make some more. 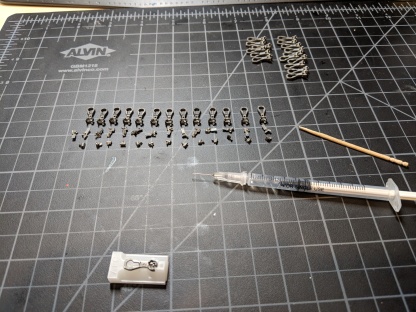 I ended up making 32 more, 30 standard ones and 2 narrow shank ones. The narrow shank ones belong to cars that have been half converted, that is a Sergent on one end and Kadee on the other. I’m also planning on finishing some scratch building projects I started a while ago and doing Accurail scale coupler boxes and narrow shank couplers.

As it’s likely to be a busy weekend I’m getting this out much earlier than usual. It has been a somewhat busier week so I didn’t really get any big changes tackled. First up is a bell on BN 97 (EMD SW1). It ships black but that seems wrong so a little Vallejo 71.067 Bright Brass and I think it looks pretty stunning. It should probably be weathered whenever I get around to weathering the locomotive. 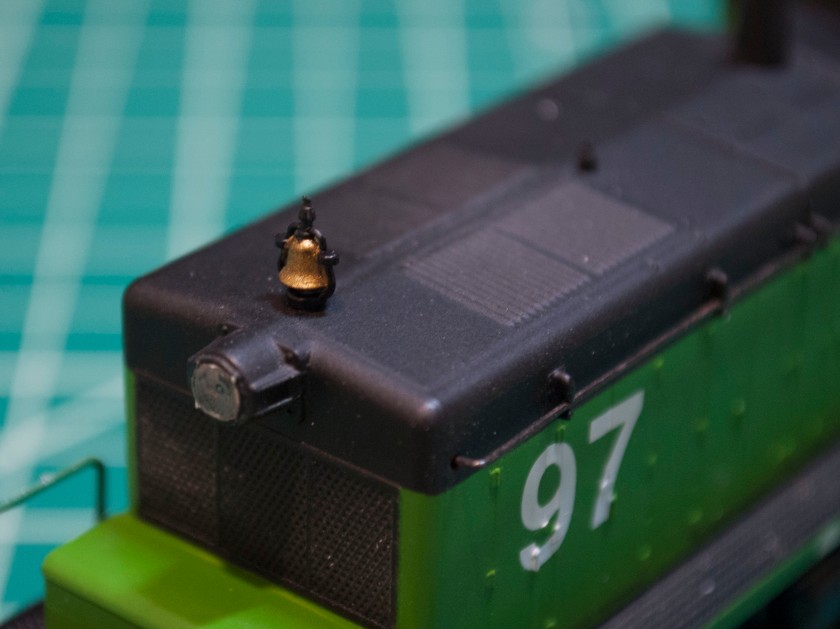 Next up is something small (and a penny)

Ok, sure that’s just a part of it but it’s a fairly important part of the Sergent coupler. 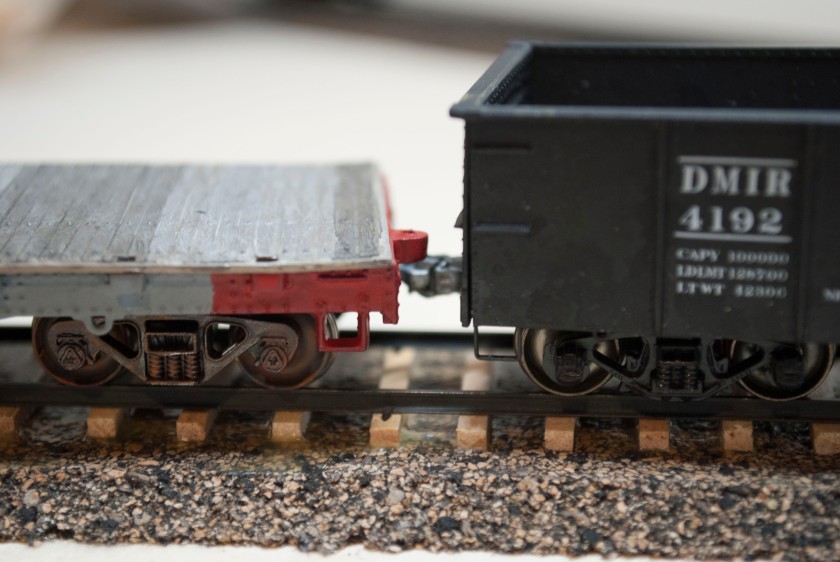 I was planning on doing a full post but had a bit of a hiccup. Basically the compatible shank (the ones that drop in a standard coupler box) are out of stock until sometime in January but the narrow shank for scale draft boxes like the Accurail #1031 or #1081 are in stock. And I had at least one Accurail piece of rolling stock with scale draft gear not a problem right? Well… I had one that had pre-drilled holes for scale boxes, in frustration I just assembled all six couplers without taking any pictures. Then I found some scale draft gear and was back in business and have converted 2.5 cars for some test operations.

If we zoom out a little on that photo we get this:

Which is another section of track that’s been laid, this means all that’s left is to the left of that picture is two sidings which are to be the primary operation area. 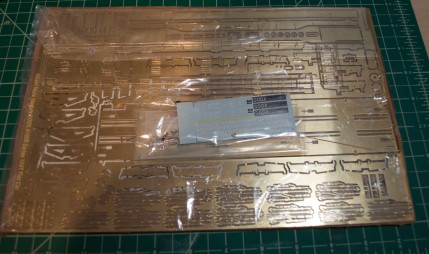 This is my Christmas break project, it’s an Alkem Scale Models Department of Defense 100 ton flat car.. the one that can carry one M1 Abrams tank. This is something that doesn’t really fit my prototype but is really really cool. Modeling northern Minnesota you probably wouldn’t see one but maybe I can just say it’s part of a strategic deployment to keep the Canadians out 🙂

I will say though, I was way more confident looking at the instructions online than actually seeing the brass and acrylic in the flesh. It will definitely be a challenge!