I was at the Albert Lea train show this weekend with a little modeling money burning a whole in my pocket. Fortunately (or unfortunately depending on your perspective) I didn’t find anything I just had to have. I was accompanied by my middle child Jacob for a little Daddy/Jakey time. Before we left I found a nice souvenir: 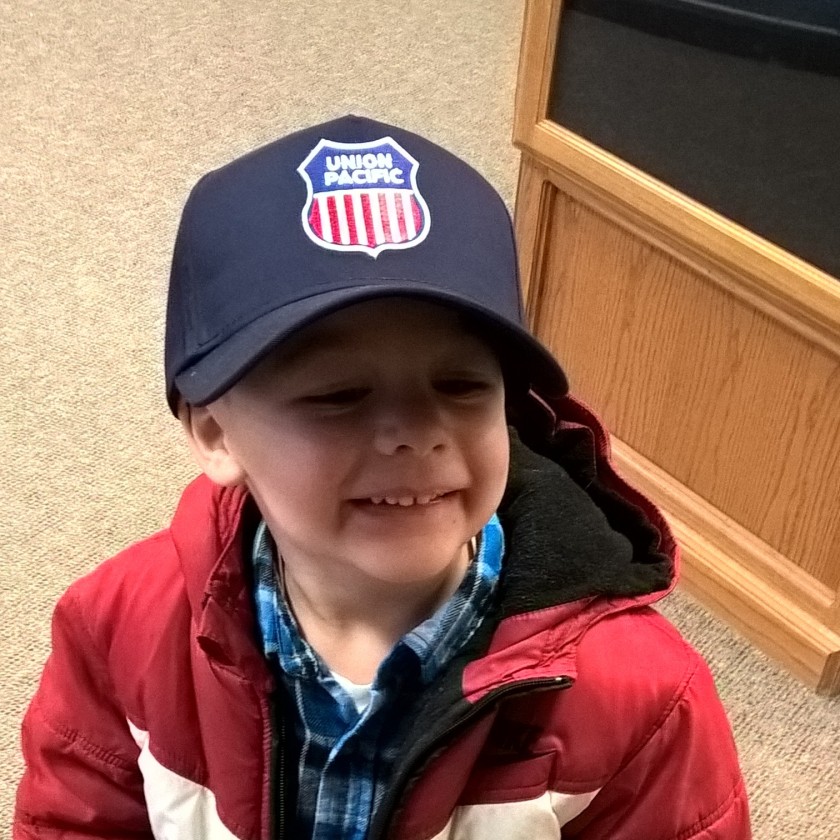 While there I caught up with a friend from a previous Free-mo setup and had an interesting conversation that actually prompted some action on my part on the shelf layout. I don’t want to rehash the whole thing but after what should have been a minor difference in opinions between the friend and another free-mo modeler resulted in my friend being “kicked out” of free-mo with the threat that she would be prevented from being involved in any free-mo setup in the Midwest.

The friend has modified her modules to work with another group’s setup and is having fun but story really rankles me and seems to go against the free-mo spirit…. and the fact that this is a hobby.

I had already been on the fence based on the space they take at home and experiences I’ve had at setups (being blamed for electrical issues on other modules that demonstrably weren’t caused by my modules or having “free-mo” participants who don’t seem to have modules and don’t help with setup or takedown come and fill the layout with trains).

So with a hobby money in my pocket I decided to head to Menards instead and got some shelving brackets which will hold my planned shelf layout. I’m not sure what I’ll do with my free-mo module for now, I might set it aside for a while and maybe come back to them in the future unless I can find a better use for the benchwork or lumber… or I can’t find a good place to store them and am forced to get rid of them.

Listening to podcasts and reading blogs you will find a lot of “right ways” to do the backdrop, or how to hide the horizon on a shelf layout etc. I’m thinking of taking a different route all together.

Rather than try to hide it through placement of buildings and perspective or use photo backdrops I’m thinking of doing a simple solid color. For my perspective the backdrop isn’t intended to have you look at it and thing sky or background or whatever, it’s primary purpose is to hide shelving track. In fact once the layout is completed I’d prefer the attention to be drawn instead to the trains, scenery, and buildings. My thinking is with a solid backdrop your brain will instead focus on the models. Whether or not this is true behavior I have no idea but it seems like it makes sense.

This brings me to color, the visual I want to convey is it’s a gray (or grey if you prefer) winter day. The kind of gray sky that assures you snow is coming, probably soon. With that in mind and the thought of making it not draw attention to your perceptions I’m shooting for a light but dull gray. What I hope to be able to do with the light gray is to use subtle colored lighting to change the time of day visually.

And by this I mean with just plain old white (but not terribly bright) lighting it looks like a dull gray day with snow imminent. However with a dull blue lighting the backdrop will start to feel more like a cold winter evening (an example of the blue evening sky I’m trying to convey). And my thinking is that I’d be able to switch the lighting and mood of the layout and support both lighting situations

I have no idea if any of this will actually work… or even makes sense outside of my brain but it’s what I hope to try and achieve.

I’ve been wanting to write this post for a while but never had enough time to actually type it out. As I mentioned in my earlier post on my shelf layout project the track plan is essentially Lance Mindheim’s LAJ shelf layout track plan from the May 2015 Model Railroader. 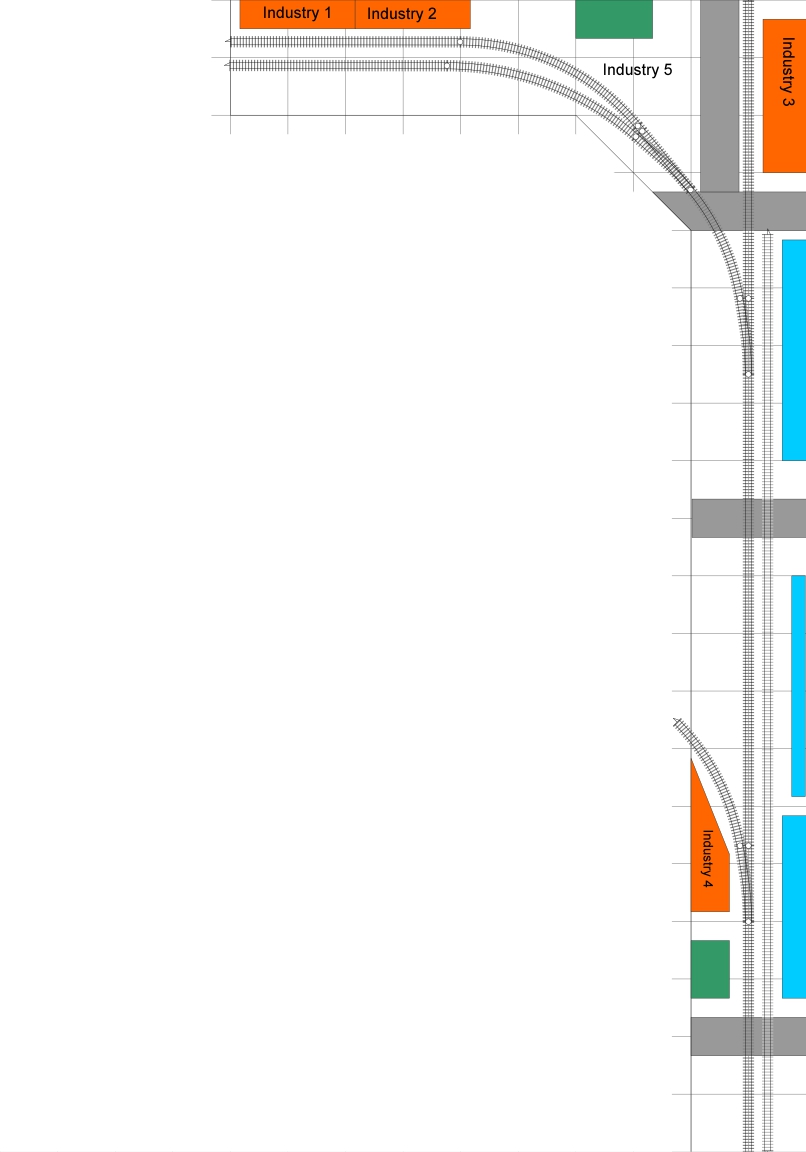 Apologies for the sort of wonky picture, in my track planning tool I made the view as wide as my room and the white gap at the upper left is the entrance to the room. It’s a 6″ grid so the we are looking at 12″ deep and approx. 5’x10′. One advantage of the 10 foot section is that it will be above a knee wall that is approximately 1o” deep compared to the upper wall so in that section the layout will really only protrude 2″ into the room.

The light gray track on the far right is abandoned track on Lance’s plan but on mine it’s used by the railroad for storage. Since this is a snowy winter scene a perfect place to store snow fighting equipment between snow storms. Since this is not an operational track it won’t be powered or accessible from the main line. Access to it will be off scene. The buildings/roads aren’t set in stone, but it’s what I’m leaning towards for industry at least.

Industry 1 & 2 will share a building and will share a majority of the traffic on the sidings in the upper left.

Where Industry 3 meats the wall is the end of the line and as such the spots are right on the main.

I’m a little iffy on Industry 4, it’d be a neat visual to spot a single car there but the track will run right to the edge so it might not actually be used just in terms of boxcar safety.

Industry 5 will be kind of a team-track style unloading area for various commodities. For example a hopper of road salt or sand might be delivered and unloaded into trucks by the city what with the record snowfall and all or maybe a box or tank car for some off layout but nearby business.

I’ve been mentally planning a shelf layout project for quite some time and I believe have even alluded to it on this very blog but never described it very much. Chris Mears’ posts on Location and Control are a large inspiration to post about it and hopefully start designing it in earnest.

The major inspiration is Lance Mindheim’s article in the May 2015 Model Railroader, the Los Angeles Junction shelf layout. The track plan is basically the same (some minor modifications and basically mirrored to fit my space).

As with the article layout it will be 12 inches deep (except the corner) and I’m a bit torn but currently leaning towards a backdrop and valance. I’m thinking of using track shelving but using the layout itself to hide them. The shelf itself will have a clean fascia that is stained to match the other trim in the room and will be tall enough to hide the shelving bracket. A bottom panel will be installed to hide the brackets from below and give it a cleaner look.

The valance will be basically the same except house some lighting for the layout. It will also be tall enough to hide the brackets. The tracks will not extend below the shelf or above the valence and between the two they will be obscured by a simple backdrop. I am looking to go with the forced perspective route so the trains are at eye level but since I have kids that would be interested in operating I’ll aim for a level that I can achieve sitting in a stool so it’s more feasible for the kids to see.

The plan with the fascia and valance are an attempt to basically make it more respectable since it’s not just a train room anymore but a regular room that also has some trains in the corner. This also means I won’t be able to dawdle with the scenery like I usually do.

The theme is winter in a somewhat city/industrial setting. I’m looking to achieve the a gray day where you get the feeling snow is imminent. Being Minnesota based and a fan of the DM&IR I’ll probably try to find some inspiration from Duluth. Unless luck is with me it will be a freelance location rather than a specific location.

This post has kind of been a big wall of text with no pictures which is a little different than my usual style. I plan to next start drawing some ideas for how the benchwork will be assembled and then (a little further out) in the future working on little display pieces to test scenery techniques and eventually building it.

One of the other things I want to try is more detailed track laying, I’ve spent far too much time staring at Proto87 track with the tie plates. At least one of my display tests will give it a try.