I’ve had a bunch of wheelsets on my workbench for quite a while, I had started them when I realized my airbrush was broken and you can’t exactly brush matte varnish on to something you’ve weathered with powders so they were waiting for an airbrush, then an adapter for my compressor, and finally time.

Today was that time, the matte varnish seems to bring out the darker red powders and mute the orange and yellow a little bit but over all I like it better than stock or the rust pen I had tried earlier.

Since I finished these up pretty quickly I decided to paint and weather the truck frames for the jordan spreader kit I’m working on and my Difco Sidedump cars I had recently been working on as well.

MW 243 will eventually be re-lettered as a DMIR side dump and all but one of the side dump is missing grab irons on the end but they are a little bit different than standard grabs so I’ll have to make them.

All of these cars need to be weathered, I just started with the trucks as an economy of time (do the same thing over and over on a bunch of cars before moving to the next step) and something that would be easy to recover if it all went wrong.

Yesterday I resigned myself to trying whatever truck and wheel painting I could manage without a working airbrush. One of my weathering projects is an attempt and a “new” weathered hopper. So the wheels have very yellow toned rust on the wheel face (because darker rust is older), no rust on the trucks (but not out of the box glossy black), blue roller bearing caps, and minimal grime etc on the carbody.

Lacking an airbrush I didn’t touch any of the carbody weathering and instead stuck to the wheels and trucks. I mixed a wash of Model Master Engine Gray and Skin Tone Dark for the trucks and the wheel face base. Then I used a light rust powder on the face of the wheel, and finally a bright blue paint for the roller bearing caps.

Unfortunately while the blue was the right color for what I wanted it was just far to thin for my purposes and didn’t really cover. Still overall I’m happy with the look so far. 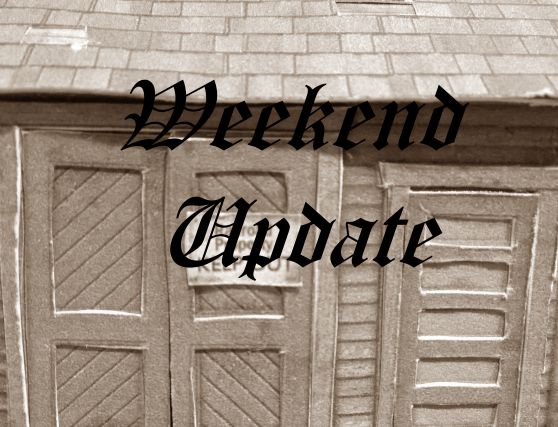 Regular readers may notice that this is later than usual and that’s because of the US holiday Labor Day. Not working in retail that means I’ve got an extra day off.

My plan was to have hit the garage while it was nice out to do some weathering but ran into some obstacles. First off I couldn’t find one of the paints I had purchased (or so I thought) specifically for weathering.

I did have the right supplies for painting and weathering some trucks and wheels though so I started tearing down some cars thinking I’d get a bunch done at once. That’s when the second catastrophe struck, the only thing I could get out of my airbrush was, well, air. A sub-optimal situation for painting.

Since I had already mixed some paint and somewhat annoyed I decided to brush paint the trucks.

Which I did, here’s a not terribly great picture super cropped image from my phone. Since I’d gone this far and was still a little annoyed about the airbrush thing decided to try the next step which was to use weathering powders to made it look old and rusty. This truck is off an older style 70-top cement hopper which could be 50-60 years old by the general era I’m modeling so it’d be pretty rusty (it’s hard to explain but with my annoyed mood in regards to the airbrush for some reason really weathering it seemed better than light weathering). 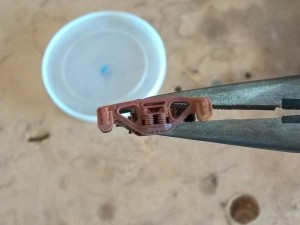 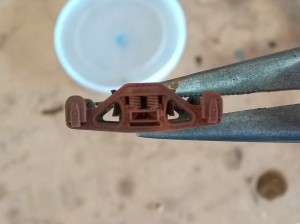 Same truck different sides, I used Bragdon Powders for this, mostly with the Dark and Medium Rust but a little Light rust. Unfortunately since I don’t have a working airbrush I can’t put a matte varnish on it so it’s not likely to find itself operating on the layout anytime soon.

One of the other things I wanted to try was modeling a newish wheel using a the light rust. 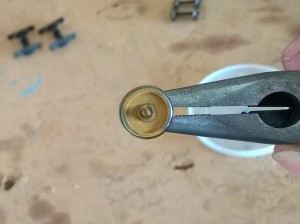 For this I did a grimy wash similar to the trucks and then give it a good coating of light rust. I think it will work but I’ll probably need to see it in use before I’m entirely sold

My lovely wife got me a single action airbrush for Christmas, and with the cold weather I really hadn’t gotten a chance to use it yet (mostly because it was cold and my air compressor is in the garage). This weekend I had some time after I mowed the lawn so I got out the paints I had started collecting and took to learning using an airbrush. The last time I would have used one would have been high school art class which was quite a while ago so I was starting from “newbie”.

My first project was a Walthers 60-ft box car I’ve had a while, it wasn’t something I “needed”  and has been a donor project for previous weathering attempts. Last time I tried using a rust colored paint marker and got decent results, but not great. I picked up some Rust paint and went to town on it. I was basing it on a prototype I’d seen at a scrap yard a couple years ago shortly before it was scrapped.

The real one was pretty rust and so is this one, there are still some angles that need some work (crevices that still have bright silver paint visible). My main observation was the airbrush made a much more realistic rust, it’s not perfect but looks pretty cool in person.

The next project was my pulpwood car I had built a while back, I was trying to match the image (link). When I was at the hobby store the paint I picked out seemed right but looks a little too purple, I’ll have to go back and look for more colors (open to suggestions too) 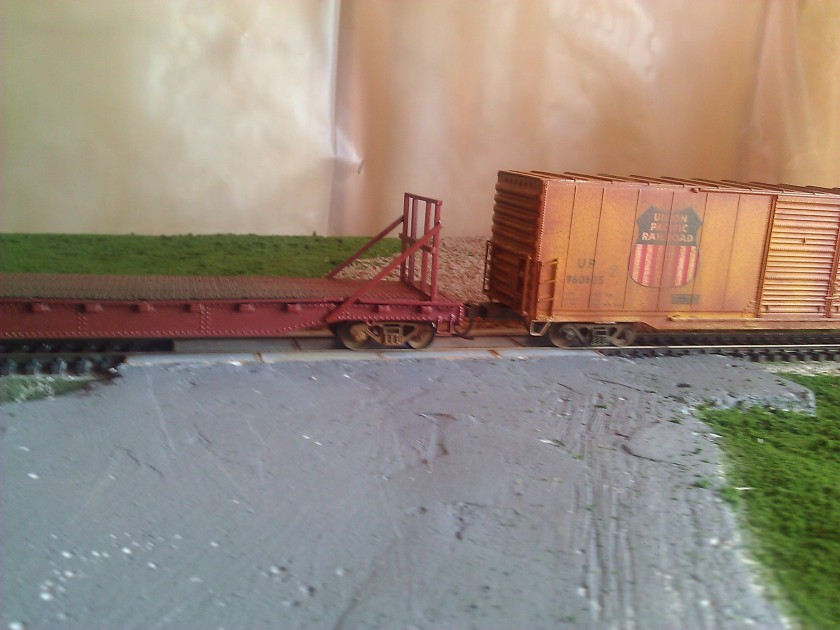 I also have some white paint that I was intending for the car shops flat project and weathering. Now that I’m a little more comfortable with the airbrush I can start on the DM&IR 11 project as soon as I can find the right paints.

While I had some train time this afternoon I decided to take a first try at weathering, I selected a UP Auto Parts boxcar that was nice and shiny. While it would be feasible for my era it was just way to clean, when I lived in Mankato MN I saw one just sitting in a metal recycling location a few years ago well rusted (shortly after I spotted it, it was cut up as scrap).

Another reason for choosing this item was that while the UP runs in the area of my prototype I could easily do without it should weathering go wrong, add that to me having the mental image of a prototype and it was a good start. Of course the camera really pulls out the areas that could use some grime, for this stage all I’ve used is a floquil rust pen.